The Narrow Band Emergency Messaging System is probably one of the easier digital systems to implement. In its simplest form, all you need is your radio and an Android device running AndFLmsg. Simply type your message in the app, hold your radio up to the phone speaker and press the PTT button while the encoded message plays over the speaker. This method is called “audio coupling”.

The downside of audio coupling is that it makes a lot of audible noise in your local environment. The sound is pretty annoying, too. It’s also possible for environmental noise to interfere with a good copy, although some of the modes used with NBEMS are fairly robust against noisy environments.

There are a few ways to solve this, but they all involve either more equipment, more capable radios, or both.

If you’re using a Baofeng UV-5R or similar HT, you could use an audio interface cable such as the BTECH APRS-K1. This cable is usually used for APRS, but it does work for AndFLmsg. One end plugs into the Kenwood connector socket on the radio, and the other connects into your phone with a 3.5mm TRRS connector. If your phone does not have a 3.5mm audio jack, it may be possible to use a USB-C to 3.5mm adapter, but it seems like a lot of people have trouble with this. Besides, that’s a lot of cables and connectors at that point.

Speaking of a lot of cables, you could also use a sound card interface such as the Digirig Mobile, the Wolphi Link, or possibly the EasyDigi if you want a more DIY option. It’s similar to the APRS cable, except that it’s more modular and can be used between various devices and radios, provided you have the right cables to go between them.

The downside to the BTECH APRS K-1 cable is that you either still have to manually push the PTT button, or you have to put the radio into VOX mode. This means that the PTT is triggered by audio rather than by pressing the button. This can cause the beginnings of messages to be cut off, or (in my experience) cause the radio to overheat and kill the battery, or it may completely fail to trigger the PTT at all. The other issue – and Baofeng radios are notorious for this – is that the VOX circuit may be quite laggy, which might cause the first part of a message to be cut off. To overcome this, it may be a good idea to start a message with some junk data, such as a bunch of zeros or just jumbled letters, in order to give the VOX circuit the split second it needs to activate the PTT.

Audio interfaces such as the Digirig shouldn’t give you this problem, as they are able to send the RTS signal to the radio, which activates the PTT much like a radio with built-in CAT control would be able to do.

As of this writing, it seems that the Mobilinkd TNC3 does not work with AndFLmsg.

AndFLmsg is based on a more feature rich suite of free and open source programs called FLdigi. AndFLmsg basically consists of FLmsg and FLwrap. The full desktop version can be a little more complicated to set up, but FLmsg and AndFLmsg are capable of talking to each other.

The first thing AndFlmsg shows you is a simple screen that looks like a chat interface. A mostly empty screen with a text field at the bottom where you type the message to be sent. For quick, informal messages that need to be sent from one person to another, this is perfectly acceptable.

However, AndFlmsg also supports forms. These are pre-formatted XML files, often made for particular organizational purposes. The most common form is the ICS-213 “General Message” form. (It is also possible to create custom forms, but that’s beyond the scope of this post.)

It takes about 3 minutes to send the text of John Brown’s last speech using a mode called MT63-2000L. With the BPSK31 mode, it takes almost 11 minutes to send the same text. AndFlmsg supports dozens of different modes that have varying levels of robustness, and transmit at various speeds. You’ll want to research the different modes and decide which is most appropriate for your group in any given situation. Take into consideration the length of the messages you’re likely to be sending back and forth, how long you can sit in one place waiting for a message to be transmitted, as well as both audible and RF interference in your local environment that you’ll have to deal with. 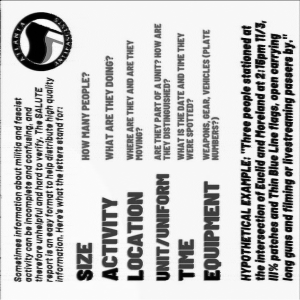 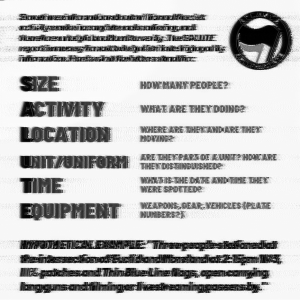 To send and image in AndFlmsg, go to the Compose View and scroll down to select the “picture.html” form. Fill out the form, and attach your picture. Tap “save to outbox” and it will take you to the Outbox view. Select your message, and then tap “TX OVER RADIO”. The encoded message will begin to transmit.

When sending images which contain text using AndFlmsg, we have observed that rotating the image 90° so that the text is vertical makes the decoded transmission 100% more legible. However, sending images with text should probably not be your primary purpose for using this system. It could be useful to send images of injuries, an area affected by flood or fire, the face of a missing person, maps, or aerial photographs for instance – in other words, things which can only be effectively expressed through images. It took more than 3 minutes to send the black and white images above.

Sending text is bound to be faster, more efficient, and less prone to error than sending images, at least in most cases we can think of.